Aftermarket exhaust parts are intended to replace the factory fitted exhaust components of a car, motorcycle, or other motor vehicle in order to improve the performance, visual appeal, or sound of the vehicle. Generally, performance enhancements are achieved by reducing the back pressure of the factory exhaust system. Frequently a side effect of a free-flowing exhaust system is either a "different" sound, a higher noise level, or both, which is desirable to some people. Aftermarket exhaust parts can also be a styling upgrade by changes to the visible parts of the exhaust like the exhaust tips. 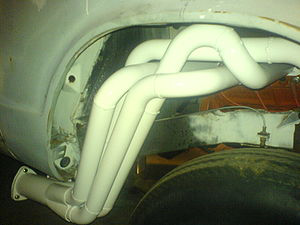 Switching from an exhaust manifold to exhaust headers (also known as extractors in Australia) will optimize the exhaust gas flow speed and in turn increase the high-end power of the engine.[1] This is done by using an individual pipe for each exhaust port that has smoother bends with a larger turn radius, decreasing airflow resistance, as well as a calculated pipe diameter to obtain a good scavenging effect for the specific engine capacity. The pipes then merge into a collector and then flow into a larger pipe (down pipe), just before the catalytic converter. With equal length headers, as each exhaust valve in the head of the engine is opened and exhaust gas is forced out, it passes down one of the header pipes and through to the down pipe, where the exhaust gas velocity causes a slight vacuum in another header pipe. This has an effect of scavenging exhaust gas from the cylinder, which is beneficial for performance. In performance engines, which have cam overlap, the scavenging effect will pull air through from the intake manifold as well, further increasing performance. The length of exhaust headers can be tuned to perform best at specific RPM ranges. Stock exhaust manifolds are usually made of cast iron and can be restrictive. Headers may or may not increase the dB level of the exhaust, depending on the original exhaust manifold it replaces and the engine. However, the pipes do "ring" with the exhaust pulses and increase under hood noise. Headers can be ceramic coated to reduce the heat radiated in the engine compartment, and to increase the temperature of the pipes which increases the velocity of the exhaust gases.

· 4-2-1 Headers where 4 pipes merge into 2 which merge into 1 (tri y's). There are different opinions as to which cylinders in the firing order should be paired for best effect. In a V8 the pairing tends to join cylinders with similar firing intervals, and this will differ between left and right cylinder banks.

· Shorty Headers where the total length of the header is shorter, with the collector closer to the engine

The section of tubing between the catalytic converter(s) and the rear muffler on cars that have two parallel exhaust pipes. Performance mid-pipes often have a perpendicular connecting pipe or the pipes temporarily merge. This is to equalize the pressure in both exhaust pipes.

· H-Style Pipe where there is a perpendicular connecting pipe, resembling the letter H 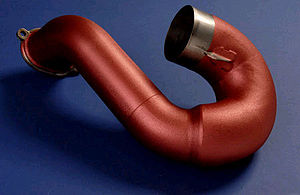 Exhausts emit a large amount of heat into the engine bay, which can have a negative effect on engine performance by rising the under hood temperatures. As a result, high temperature insulation is used, more commonly known as heat barriers, for exhaust heat management. Thermal barrier ceramic-coatings are specifically designed to reduce heat loss from engine exhaust system components including exhaust manifolds, turbocharger casings, exhaust headers, downpipes and tailpipes. When used under-bonnet, these have the positive effect of reducing engine bay temperatures, therefore lessening the intake temperature. As well as providing thermal protection, these coatings are also used to prevent physical degradation of the composite due to frictional processes. This is possible because when applied, the ceramic material bonds with the composite (instead of merely sticking on the surface with paint), therefore forming a tough coating that doesn't chip or flake easily.

Glass packs (commonly called cannons or hotdogs) employ two tubes, an inner perforated one, and an outer solid one. Between these tubes, there is sound insulation. These mufflers decrease back pressure, but are relatively ineffective at reducing sound levels. Glass packs can be used to give the engine a deeper "throaty" sound. The name of the glass pack mufflers is quite often associated with the name of Cherry Bomb, as this company has been making glass pack mufflers for over 50 years. In the 1960s, these mufflers were often installed on American muscle cars. The construction of these mufflers is very straightforward, as it's simple enough to consist of two tubes of different diameter. Apart from the sound insulation between these tubes, glass pack mufflers do not feature any other sound deadening elements or resonators. With time, pitch of glass pack mufflers changes and the sound becomes louder under the influence of temperatures.

Mufflers are a series of concentric or eccentric pipes inside the expansion chamber cavity. These pipes allow sound to travel into them and cause the sound waves to bounce off the closed, flat, ends of the pipe. This reverses the direction of the sound waves making them collide with oncoming sound waves and cancel each other out. This design is usually very free-flowing but does not offer as much sound reduction as a muffler.

Resonators are sections of exhaust pipe that expand to a larger diameter and allow the sound waves to reflect off the walls and cancel out. Resonators are mostly used to reduce rapines and popping. They do not produce much back pressure.

Many North-American cars (and possibly cars in other parts of the world) made since the early to mid-1990s can have up to 3 distinct (but similar looking) exhaust components downstream from the catalytic converter(s). Each of these components may be called resonators or mufflers. Usually only the last component is the actual muffler, and the other components are the resonators. 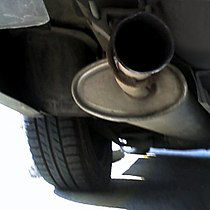 Stock exhaust muffler of a car

· An increase in peak engine horsepower can be achieved.

· Gas mileage can be increased in a well designed aftermarket system.

· Aftermarket parts can be cost effective replacements for stock parts when OEM parts are not readily available (or are more expensive).

· Aftermarket parts are often available in longer lasting stainless steel, whereas many OEM exhaust components are made from mild steel and have a limited lifespan.

· Removing or bypassing a catalytic converter will violate emissions laws.

· A noticeable increase in noxious fumes may result (particularly when the catalytic converter is removed or bypassed, and/or when exhaust outlets are rerouted to the side of the car as with side-exit exhausts).

· Engine sound may be more noticeable to both driver and pedestrians, resulting in increased noise pollution.

· Some modifications can void factory warranties.