Usually, header systems are fabricated from welded-up collections of cuts from pre-formed "U" bends and straight segments of tubing in the chosen material. There are several reasons for that, but the most persuasive is the fact that, in order to achieve the design configuration, there is not usually ample grip-space between bends to form the pipes from a single piece of tube. In some cases, where the bends are not too closely spaced, the pipes can be bent up in one piece using a mandrel bender which will retain the circular cross section of the tube throughout the bend and transition. The typical exhaust tube bender commonly found in automotive exhaust shops is not suitable for that duty since those benders distort the cross-section of the bends terribly and shrink the cross-sectional area.

Tubing bend radii (the radius of the plan-view centerline of the bend) are expressed in terms of multiples of the tubing diameter. For example, a "1.5-D bend" in 2-inch diameter tubing would have a bend radius of 3 inches. One fabricator described some specialized machinery he had devised for making high-quality exhaust tubing from sheet. The first machine rolls the sheets into straight tube sections of the required diameter. The second machine completes the straight section of tube with a continuous welded seam using a semiautomatic inert-gas-shielded process. A third machine does what had been thought to be impossible: bending 0.50-mm wall inconel tubes into less-than-1-D radius sections while retaining accurate cross-sectional geometry.

There are several materials commonly used in competition header and exhaust systems, depending on the requirements and operating temperatures.

For the most demanding applications, Inconel tubing is commonly used. Although the name "Inconel" is a registered trademark of Special Metals Corp., the term has become something of a generic reference to a family of austenitic nickel-chromium-based superalloys which have good strength at extreme temperatures and are resistant to oxidization and corrosion. Because of the excellent high-temperature properties, Inconel can offer increased reliability in header systems, and in certain applications, it is the only material which will do. The high-temperature strength properties can enable weight-reducing designs, since, for a given reliability requirement, Inconel allows the use of much thinner-wall tubing than could be used with other materials. The catch, as usual, is that Inconel tubing is quite expensive.

Certain Inconel alloys retain very high strength at elevated temperatures. One of the favorites for header applications is Inconel-625, a solid-solution alloy containing 58% Nickel, 22% Chromium, 9% Molybdenum, 5% Iron, 3.5% Niobium, 1% Cobalt. It has good weldability using inert-gas-shielded-arc processes, and good formability in the annealed condition, and has a lower thermal expansion rate than the stainless alloys commonly used in exhaust systems. Weldability and formability are both important because of the somewhat limited availability of Inconel tubing sizes, which often makes it necessary to form tubing sections from sheet. The yield strength of this alloy at 650 °C (1200°F) is 345 MPa (50 ksi), while at 870°C (1600°F) it is a remarkable 276 MPa (40 ksi). As with many metals, the high-temperature strength diminishes as the amount of time the parts are exposed to extreme temperatures increases.

Inconel tubing is nearly essential in high-output turbocharged applications, and I was told by several knowledgeable players that all the Formula-One cars and a few Cup teams use Inconel for their headers, both for reliability and for weight savings.

One builder told me that some teams are routinely using headers made from 0.50-mm (0.020 inch) wall Inconel tubing. He also told me that, in view of the immense heat load imposed by the exhaust gasses of contemporary Formula One engines, he seriously doubted that a set of stainless headers, even in 1.6-mm wall (0.065 inch), would survive. Figure One, a BMW F-1 engine at full power, graphically illustrates this demanding environment.

There are several austenitic stainless alloys which are commonly used in exhaust systems. In order of reducing temperature capabilities, they are 347, 321, 316 and 304. In addition, special variations in the basic alloy chemistry (carbon, nickel, titanium and niobium) are available to enhance the high temperature strength of these alloys.

Regarding the use of stainless, I was told by a knowledgeable source that in NASCAR Cup racing, the 304 and 321 stainless alloys were used more often than Inconel, depending on the preferences of the various teams. The manager of one prominent team told me that, in view of the facts that thinwall Inconel headers are (a) very fragile and readily damaged by inadvertent mishandling, (b) "grotesquely" expensive, and (c) provide almost immeasurable gains on a 3600 pound vehicle, his opinion is that the use of Inconel headers is not prudent stewardship of his resources. For a peek at the magnitude of the costs involved, one fabricator told that a single 1-D "U" bend of 2-inch diameter, 0.032-inch wall Inconel tubing would cost somewhere in the neighborhood of $200, whereas the same bend in 321-stainless would be in the $65 range.

Although titanium has been made to work quite well in exhaust valve applications, the practical temperature limits for titanium alloys suitable for tubing is quoted at about 300 °C (575 °F), which makes that material suitable for lightweight tailpipes in various applications and in certain motorcycle applications as well. My favorite supplier of titanium reports that grades 1 and 2 commercially-pure (CP) titanium have been used for the exhaust systems on competition 2-stroke motorcycles for decades. For lightness, many of these systems were made using 0.50 mm wall tubing, and treated as a consumable, being replaced after every meeting.

One might ponder why the same materials used for titanium exhaust valves are not used for exhaust tubing. Apparently, the simple reason is cost vs. benefit, since the estimated cost of thin sheets of Ti-6242 were estimated at over $150 per pound in large-quantity purchases. Add to that the fact that this material lacks the ductility to be readily formed into tubes, plus the fact that there would be problems welding the seams of a rolled tube, and yet more problems forming the welded straight tubes into bends, and it becomes evident that there are more suitable materials for exhaust tubing use.

Recently, I had the opportunity to hold in my tired, worn hands, a primary header tube which was alleged to have been for a nearly-contemporary F-1 application. Pictures of said hardware were not allowed, but the reproduction from memory, shown in Figure Five, illustrates the very interesting feature, the existence of a large-diameter step in the primary, quite close to the flange. 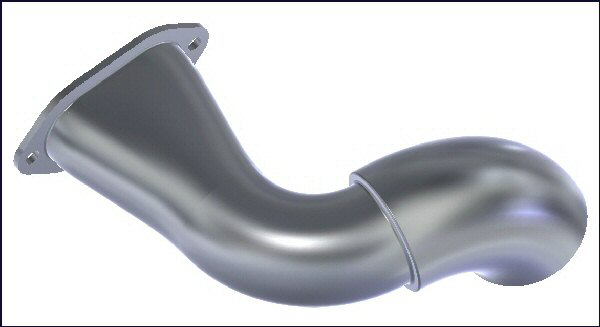 The illustration shows a single 10-mm step spaced approximately 125 mm from the flange. However, experts say that in 2008, two smaller steps (5 mm each) in the primary are more commonly seen, depending on the research and beliefs of the developers. The first step is typically between 100 and 200 mm from the flange. If there is a second step, it is typically another 100 to 150 mm beyond the first step, and in general, tubing sizes range from about 50 mm to 65 mm. (1.97" to 2.56"), although the specific designs seem to vary dramatically from team to team.

My first impression, which was shared by a number of experts with whom I spoke, was that, since these engines are operating up to 19,000 RPM, then the primary length required to achieve the negative pressure pulse during overlap was so short that, due to packaging constraints, the location of the collector would be too far away from the valves to initiate the properly-timed reflection. However, a bit more thought and a quick calculation revealed quite a different theory.

For purposes of approximation, assume that the mean temperature of the exhaust gas in the primary up near the head is 1500°F (815 °C). The speed-of-sound-in-air equation (close enough for approximations, according to Professor Blair) produces a sonic velocity of 661 m/s (2168 feet per second). At 18,000 RPM, (300 RPS) one crankshaft rotation takes 3.33 milliseconds (ms) or 3333 microseconds (μs). Therefore one degree of crank rotation takes 9.26 μs (3333 ÷ 360). If the first step in the primary is 200 mm from the back of the exhaust valves, then using the calculated speed of sound as an approximation of the propagation speed of the finite pressure wave, the 400 mm round trip from the valve to the step and back takes about 600 microseconds, or 65 degrees of crankshaft travel.

Assume that, in an 18,000 RPM engine, the establishment of enough exhaust valve opening to allow meaningful flow would occur in the neighborhood of 100° after TDC. Therefore, it is clear that this first reflection is timed to arrive back at the valves even before the piston reaches BDC. For what purpose? Recalling that during blowdown, there is sufficient pressure ratio in the cylinder to establish choked (sonic) flow through the exhaust valve orifice, then it would certainly be advantageous to maintain that gas velocity for as long as possible.

A noted engineer in the world of Formula-One confirmed that this is exactly the reason for the one-or-more large-magnitude steps in the primary: to place a negative pressure at the back of the exhaust valve timed so as to extend the duration of the critical pressure ratio.

The required Cup engine configuration (90° V8 with a two-plane crankshaft) provides an interesting challenge for exhaust system designers. Because of the firing order of this engine configuration, the exhaust pulses on each bank of the engine are unevenly-spaced. In the words of the technical director of one prominent team: "The exhaust system design in Cup is an interesting tradeoff between minimizing flow losses while at the same time trying to optimize whatever tuning you can do with a non-equally-spaced system, which isn't a lot."

That tuning difficulty led (more than a decade ago) to the re-introduction of the 4-into-2-into-1 (so-called "Tri-Y") configuration, which has been around since at least the 1960's. In the "Tri-Y", cylinders on each bank are paired so as to provide the maximum separation between pulses. Using the above numbering scheme, the primaries of cylinders 1 & 5 and 3 & 7 would be merged into slightly larger secondary pipes, which after the appropriate length, would be merged into the larger collector. On the right side, adjacent primaries are paired (2 & 4, 6 & 8). That provides a 450°-270° separation between pulses in each secondary. An example of this configuration is shown in Figure Six.