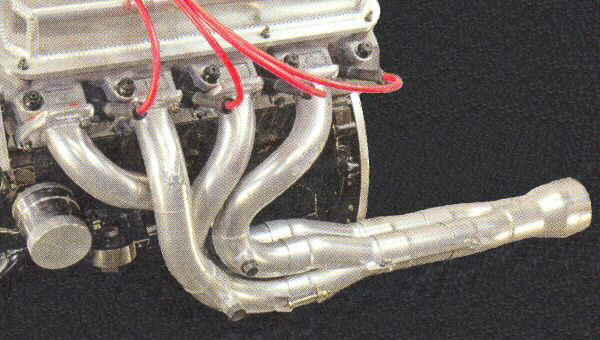 The tuning of this type of system is not terribly intuitive. Several well-placed experts in Cup told me that their teams have consumed large amounts of modeling time using very sophisticated (and expensive) simulation software to arrive "in the ball park", and then fine tune the designs on the dyno. And, as would be expected, there are different header designs for long tracks, short tracks, and restrictor-plate tracks.

One expert mentioned that, while it is relatively straightforward to accurately model the behavior of the primaries, it is very difficult to accurately model the secondaries and collectors, because the theoretical reflections are meaningfully altered by specifics of geometry (bend radii, intersection angles, nozzle and diffuser angles, etc.) which cause destructive interference and pulse attenuation. That being said, several experts agreed that the rules-of-thumb still apply: better low end needs smaller and longer tubes; better high end needs bigger and shorter tubes.

There are additional challenges in Cup header design and tuning. The chassis teams often impose a major set of constraints on primary length and bend location so as to not interfere with critical items such as upper control arm pivot locations. The prevailing view is that, in terms of lap times, making the car turn better is a reasonable trade-off against a small amount of power increase. The straightforward header shown in Figure Six simply to illustrate the concept, is a dyno header, built almost without regard for any packaging constraint. Consider how difficult it might be to implement that concept within the very tight engine compartment of a Cup car, constrained by intruding frame tubes, suspension pickup points, a 230-mm long external oil pump, and the like.

Given the existing packaging constraints, it is indeed fortunate that the primary lengths in the 4-2-1 system are not nearly so critical as are the lengths of the secondaries. Several experts told me that the engines are very sensitive to changes in the length of secondary sections, and that most of the development effort is focused on secondary merge, length, diameter and step issues.

Moving rearward, the NASCAR Cup rulebook provides some interesting insight into additional exhaust system challenges. The rules include the requirements that the exhaust system for each bank of the V8 engine must be completely separate and may not connect in any location except for a single "X" or "H" pipe in a tightly-constrained region of the tailpipes, and must end with two tailpipes which exit under the frame rails within a tightly-constrained area on the right side of the car. Further, the pipes from the collector to the exit must be magnetic steel, no larger than 101.6 mm (4.0 inches) ID, and may have a circumference no greater than 336.5 mm (13.25").

The circumference restriction provides a subtle challenge. In order to fit beneath the COT frame and still provide ground clearance, the large diameter tailpipes are reshaped into a cross-sectional form having two long parallel walls (no closer to each other than 51 mm ) and a full radius at each end, such as illustrated in Figure Seven. 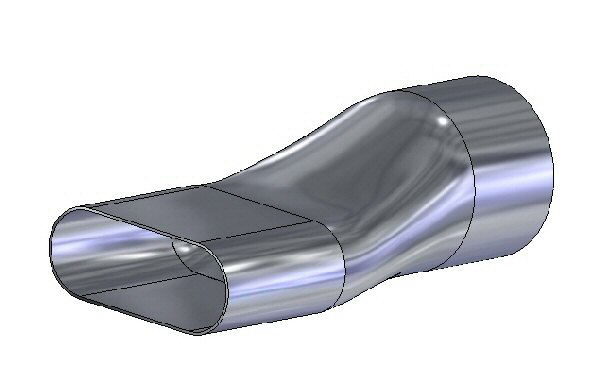 Because of the fact that a circular section provides the most cross-sectional area for a given circumference, the necessary ovalling of the pipe exit puts an orifice at the end of the tailpipe. If the exit section is the minimum height of 51 mm, the limiting circumference (assuming 1.6 mm-wall tube) yields a cross-sectional area which is only 77% of the 101.6 mm round tailpipe. That reduced area can be a flow restriction at high RPM.