At the top levels of drag racing, in particular Top Fuel and Funny-Car, the exhaust systems might seem very simple. The header systems, known as "zoomies," consist of a single pipe on each cylinder, dumping straight into the atmosphere, with each tube bent so that it faces upward, rearward, and often outward. The outward angle of bend in Funny Cars is typically larger than would be seen in an unbodied Top Fuel car, in order to eliminate bodywork damage from both temperatures and exhaust concussion forces.

In addition to the noise, a notable feature of these exhaust systems is the large volume of open, whitish flame standing just off the ends of these pipes, as shown in Figure Eight. That flame-front is the byproduct of two intersecting parameters. 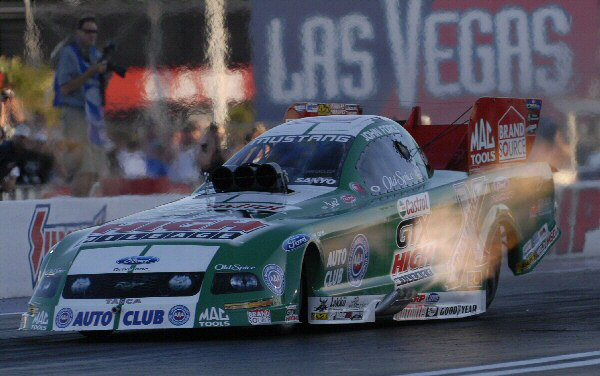 First, these highly-supercharged, nitromethane-nourished engines have fuel flow rates stated to be in the 80 to 90 gallon-per-minute range. With that amount of fuel being delivered, it is clear that there will be a certain amount of fuel puddling behind the intake valve. When the intake opens, some portion of that collected fuel will be either in liquid form or in a mixture which is too rich to burn (insufficient oxygen molecules). Further, these engines apparently use a large amount of overlap in order to assist in cooling. The combination of the excess fuel and the long overlap assures that a non-trivial quantity of raw fuel and fuel mixture is short-circuited directly down the exhaust pipe, and heated during its journey. When it exits the primary, it finds an abundance of oxygen and initiates an energetic secondary combustion. The combination of the large momentum-change of the mass flow through the engine, plus this secondary combustion has been calculated by at least one aerospace engineer to generate normal reaction forces in excess of 2500 pounds (1130 kg).

Given that the pipes are angled in both the lateral and longitudinal planes, that exhaust reaction force can dramatically affect the vehicle stability. The vertical component obviously provides downforce to the chassis. The rearward component will add propulsive thrust. If everything is in balance, the sideward components generated by the left and right sets of pipes should counterbalance and net to near zero. However, I was told that the loss of one cylinder on a Funny-Car can cause the driver to have real difficulty controlling the car. That is because the loss of a single cylinder unbalances the sideward-thrust and adds a yaw-moment from the now-asymmetric rearward thrust. That same (highly-credible) source told me that the loss of two cylinders on the same bank will amost certainly render the car uncontrollable.

As might be expected, the length of the primaries plays a critical role in the engine tune. I was told by a lead engineer on a prominent Funny-Car team that there was a considerable amount of development effort required just to get the gasses out from underneath the Funny-Car bodywork.

That source also said that when they tried collector-systems, the result was that the engines ran "horribly". The theory is that the huge amount of exhaust gas flow into a relatively-confined space raised the collector pressure enough to create a destructive blockage in the collector pipe.

As far as the pipes themselves are concerned, it is well known that "too sharp a bend" in the primary or "too much length" dramatically reduces engine performance. Apparently, in supercharged nitromethane engines, any tuning on the exhaust side (cam, ports, headers) requires a substantial alteration in the fuel delivery curves. After experimenting with various exhaust system changes, then working to get the fuel system back into line with the engine changes, the net change in performance was typically considered to be not worth the time and effort. After having determined a working combination, experience has shown that development efforts in areas other than the exhaust system will be more productive.

I was told that currently, there is not a large amount of development effort on the Funny Car exhaust system, as the result of several practical and economic factors. It is hard to imagine the level of difficulty involved in doing engine development on a system which is not well suited to a dyno cell, and therefore must be tested on the track in 5-second test sessions. Without taking into account salaries, logistics, transportation, food, lodging, and other "overhead" expenses, the out-of-pocket cost to make "one more test run" is uncomfortably close to ten thousand dollars.