Neil Spalding, Race Engine Technology's in-house expert on motorcycles, provided me with a gallery of detailed photos showing the varied strategies employed in Moto-GP (the F-1 of motorcycle racing) to shape the engine power curves with exhaust tuning finesse, along with a wealth of information on these machines, including the fact that the use of Inconel tubing is fairly common.

In several RET articles, Neil has discussed the difficulty in getting the available power to the ground in Moto-GP, and the efforts which the manufacturers have taken to improve the available traction, including implementation of uneven firing orders so as to affect the tire contact patch in a beneficial way. The uneven spacing of exhaust pulses requires some out-of-the-box thinking to gain benefit from exhaust tuning. In order to linearize the engine power curve (flatten the torque curve) there has been widespread usage of the 4-2-1 design described above in the Cup section.

Figure Nine shows the torturous 4-2-1 system developed for the 2005 Yamaha 990 cc irregular-fire inline 4. The picture shows the diverging taper in the primary just past the flanges. Neil told me that the current system for the 800-cc engine has substantially shorter primaries and secondaries due too the fact that the 800 cc engines turn up to 18,000 RPM, where the 990's were in the 16,000 RPM range. 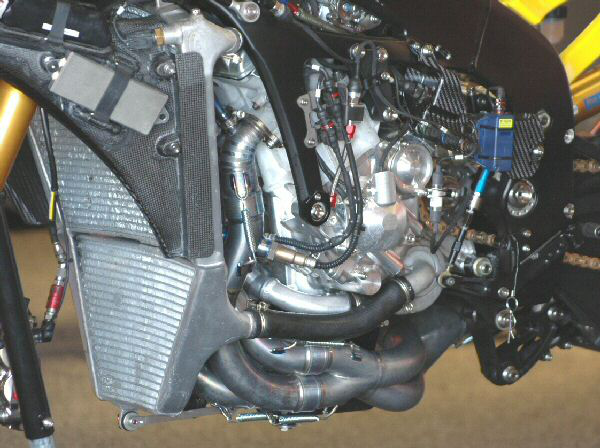 Figure Ten shows the individual stacks used on an experimental Kawasaki 990 cc engine, which reportedly had a flat-plane crankshaft but which fired pairs of cylinders together. Note the very long tapered expansion pipes and reduced exit diameters, which will help reduce the extreme power-curve peakiness that occurs when a primary opens directly into the atmosphere (which constitutes an apparent infinite expansion area ratio). Note also how the lower tube has a longer centerline length and a longer tapered end. That too will help to spread the potentially very peaky tune of these pipes over a wider RPM band. 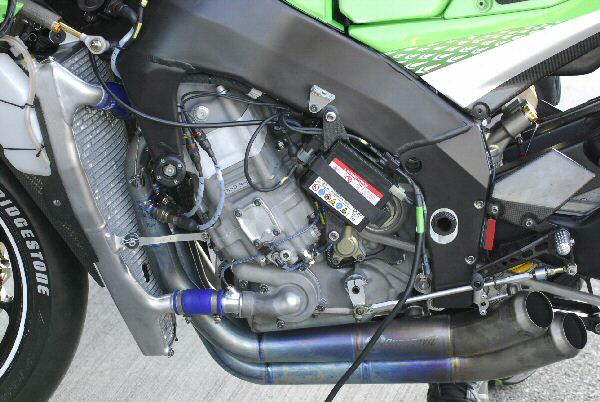 According to the turbocharger engineers, the most important aspect of designing a good header system for a turbocharged application is to maximize the recovery of exhaust pulse energy. This energy recovery has at least two components.

The first is to provide evenly-spaced exhaust pulses to the turbine. To accomplish that, it is helpful first to be working with an engine (or bank of an engine) which has evenly-spaced firing intervals. In an application in which the cylinders feeding a given turbine or turbine section have even spacing, the lengths of the primary tubes should be as close to equal length as possible.

The second component is to maximize the recovery of pulse velocity energy. For that purpose, turbine housings are available in split housing, or "twin-scroll", configurations, in which there is a divider wall in the center of the turbine nozzle housing to separate the incoming flow into two separate streams. That allows the nearly ideal pulse separation of 240 crankshaft degrees to be achieved on an inline-6 engine by grouping the front 3 cylinders into one side of the housing and the rear three cylinders into the other side. The same effect can be achieved on a V6 engine by grouping each bank separately.

Although the split housing arrangement adds wetted area (hence boundary layer drag) to the gas flow, the advantages more than offset that drag increase. In instances where pulse energy recovery has been optimized, it is often possible, based on calculations using pressure and temperature losses across the turbine, to observe very high turbine efficiencies, which some experts say are in excess of 100%.

Pulses which are evenly-spaced but too close together will reduce the effectiveness of this pulse energy recovery. Apparently, that phenomenon is seen on even-fire inline 4-cylinder engines as well as on individual banks of flat-crank V8 engines, where the pulse separation is 180°. I was told that the ideal pulse separation was in the neighborhood of 240 crankshaft degrees, and that, on an even-fire (single-plane crankshaft) inline-4 (as opposed to the two-plane crankshafts used in some Moto-GP motorcycle engines) it is better to separate the end cylinders into one side and the center two into the other side of the turbine than to run all four together into an undivided scroll housing. The same reasoning applies to each bank of a V8 with a single-plane crankshaft.

With regard to the uneven pulse spacing of each bank of a two-plane crank V8, there is agreement that it is very difficult to organize the pulse spacing in a useful way. It has been demonstrated that where a small turbo is used on each bank, the use of a short-tube 4 into 2 system (same idea as the 4-2-1 discussed above) feeding a twin-scroll turbine could take some advantage of the resulting 450 - 270 separation in terms of pulse energy recovery. If a single, large turbo can be located in such a way that the tubing lengths from each bank can be fairly equal, then splitting the primaries to achieve 180° separation would be an advantage.

Whenever practical, reducing the heat (energy) losses before the exhaust gasses reach the turbine allows the turbine to be more effective. This has been done with double wall tubing, reflective coatings, and wraps. However, insulating the pipes to reduce heat loss will, of course, raise the operating temperature of the pipes themselves, which can require extreme-duty materials where more affordable materials would suffice in the un-insulated form.

Another important exhaust system consideration, in order to provide the most effective operation of the wastegate in controlling boost, is to position the wastegate inlet port so that it is subject to exhaust stream total pressure, rather than off to the side where it sees only static pressure.