One of the main part of our business is fitting new exhausts. It has been the same now for the past 30 years, when Kwikfit were one of the first companies to give a heavy discount on new exhaust systems that they fitted. Before then we all went to a garage and would have charged for the part and an hourly rate. Some garages still do this type of charging at the present time, and I must be honest we are now doing the same. We make a profit on the part and have an hourly fitting rate, in my opinion the day’s of fast fit car parts are coming to an end. 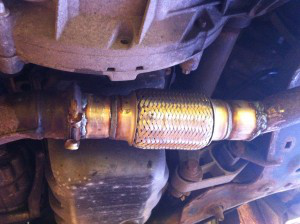 The Exhaust Systems with Flexi-pipes fitted on today’s cars are very different to the ones that were fitted  to say the old Ford Cortina’s and Vauxhall Visas. These cars would be coming in for a new Cheap Exhaust system every 18 months. We also used to buy the exhausts in bulk, say from large companies such as Quinton Hazel, Bosal, T.I. Bainbridge and many more. The list of suppliers was endless, all fighting to sell us their products at the best deals. Then as in the tyro trade the wholesalers moved in and the motor factors, such as Andrew Pages, who will sell their parts to anybody, thus cutting our profit margins.

This once again cut our margins and every Tom Dick and Harry started fitting cut price exhausts, this has always been true of the garage trade you have to make money in the early day’s before the rest catch up with you. Then we moved onto the drive to lower the car emissions and the introduction of the catalytic converter fitted with Flexi-pipes . We were all rubbing our hands when the first cats started to break and had to be replaced, I used to travel to Mansfield almost every day to buy catalytic converters at the right price from a company that was in it’s early stages then, B and M exhausts, sometimes they would make them for me while I waited and they were also half the price of other suppliers in Halifax.

After a couple of years other suppliers moved into the market and once again the margins dropped and we were fitting the Flexi-pipe and catalytic converters at discount prices to match our competitors. This brings me up to today’s market. We no longer give exhaust prices out over the phone, in my opinion those day’s are gone. Customers will ring up for a back box only to find that the car needs the inter pipe as well, or the car has a one piece system fitted that we need to cut or the new parts won’t fit. In general we ask the customer to bring his car in to us and we will check the exhaust out on a ramp, we can then give a fair price for the job in hand. At first I thought we would lose out but nearly every car owner brings the car in, as if it was any other part of the car that needed checking out , we give them a price including a profit on the part and the time it takes to do the job.

I feel that this is an honest way of doing things and the customer does not “rant and rave” when you have to tell him that he needs “this and that” in extras, we also charge for new clamps and rubbers and we fit as many exhausts and Flexi-pipes as we  ever did, and we can even save the motorist money. A guy rang up the other day with a noisy exhaust on his BMW Mini. We did our usual thing and sure enough the guy turned up. When we checked his exhaust system we found that it was broken at the catalytic converter. When pricing the job up, we found that there was no aftermarket parts for his model and that it was a main dealer part only. It would have cost us just over £300 from BMW. We then asked him if we could fit a repair Flexi-pipes and this would cost around the £100 mark, a huge saving. The guy was over the moon and we carried a successful repair, we were happy and so was our customer.