Exhaust noise always means trouble. But even if you can't hear anything, it may be leaking. Any time you are under your vehicle to change oil or do other repairs, you should take a few minutes to inspect the exhaust system. 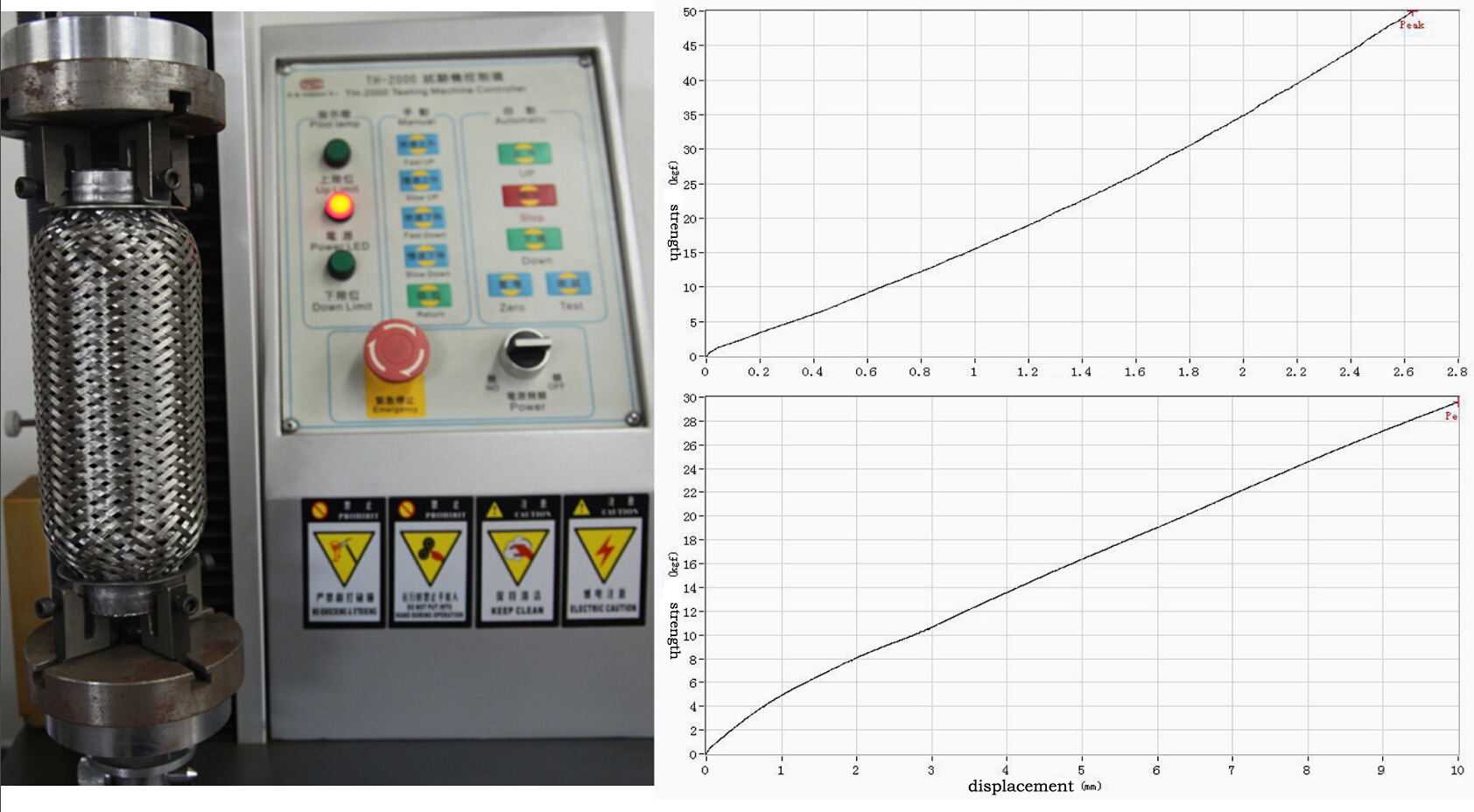 This is the test report of our pipes.You can see the curve of the replacement and the strength is very smooth.The softness of the pipe achieve a very hign standard.More soft it is ,shock absorption effect is better.

Another source of buzzing noises in the exhaust, especially on high revving four-cylinder engines, is harmonic resonance. This is typically loudest at certain engine rpms and/or when accelerating hard under load. Original equipment exhaust systems are typically tuned to dampen the more annoying high pitched tones, which is why many OE exhaust systems have a second muffler or resonator. The length, shape and chamber design of the resonator is designed to silence certain sound frequencies in the exhaust. If the OE muffler has been replaced with a straight pipe or a poorly designed replacement resonator or muffler, the exhaust system may not do a very good job of quieting the more annoying sound frequencies. The cure here would be to replace any missing components in the system (typically the resonator), and/or to install a better quality replacement muffler. You should also note the quality of the sound coming from the tailpipe. A high-pitched hiss or whistle at the tailpipe may be the result of a restriction in the exhaust system and unusually high backpressure. If the engine lacks high-speed power and is getting poor fuel mileage, it is a pretty good clue that the engine is having trouble exhaling. Exhaust Restriction If a vehicle has been getting poor fuel economy or has a loss of power, the exhaust system might have an internal restriction or blockage. Exhaust system restrictions can be caused by damaged or crushed pipes, or collapsed baffles inside a muffler or resonator. But the most common cause these days often turns out to be a plugged catalytic converter. A quick way to check for a suspected exhaust restriction is to read the engine's intake manifold vacuum at idle. Most engines should have about 18 or more inches of vacuum at idle. A lower-than-normal reading is a classic symptom of excessive backpressure in the exhaust. Exhaust Backpressure Backpressure can be measured directly several ways. One is to measure it at the air pump check valve. Remove the check valve and install a pressure gauge. However, the check valve must connect to the exhaust system ahead of the converter. (Note: if the plumbing hooks up at the converter, this technique won't give you reliable results.) Backpressure readings should generally be less than 1.5 psi (though some do allow as much as 2.75 lbs. at idle). Rev the engine to 2,000 rpm and note how much the reading increases. If it's higher than 3 psi - or keeps climbing - you've identified a restriction problem. Backpressure can also be measured by removing the oxygen sensor from the exhaust manifold and installing an 18mm adapter to hook up a pressure gauge. But all this will tell you is whether or not there's too much backpressure in the exhaust. It won't tell you where. If you see no obvious damage to the exhaust system, such as a crushed pipe, disconnect the exhaust pipe aft of the converter and check intake vacuum or backpressure again. A return to normal readings would tell you the problem is in the muffler, while no change in readings would tell you the problem is in the converter. Plugged Catalytic Converter You can also check for a plugged converter by removing it, holding a shop light at one end and peering in the other end. With honeycomb-style converters, you should be able to see the light. No light means a plugged converter. Converter failures of this type usually occur because of ignition misfire or a leaky exhaust valve that has been allowing unburned fuel to enter the exhaust system. When that unburned fuel hits the converter, it ignites, sending the converter's operating temperature soaring. This breaks down and melts the honeycomb substrate that supports the catalyst, creating a partial or complete blockage. Replacing a plugged converter will temporarily restore free breathing, but unless the cause of the converter failure is also diagnosed and corrected, chances are the replacement converter will suffer the same fate. As for checking converter performance, there's probably no need unless the vehicle has failed an emissions test. On 1996 and newer vehicles with OBDII, a downstream oxygen sensor monitors the efficiency of the converter and triggers the Check Engine light if the converter is not doing its job. But on older vehicles, there are no self-diagnostics for detecting a tired or contaminated converter. An exhaust analyzer is needed to check the converter. Another method is to check the converter inlet and outlet temperatures with an infrared thermometer. The outlet should be 50 or more degrees F. hotter than the inlet if the converter is working. Exhaust Pipe and Muffler Replacement Tips If a muffler or resonator has failed, don't replace it without checking the integrity of the pipes on both sides. Pipes that often appear to be OK on the outside may, in fact, be seriously weakened on the inside as a result of internal corrosion. For a whisper-quiet exhaust, install a quality replacement muffler. Direct fit are easier to install than universal-style mufflers and maintain the OE appearance of the exhaust system. Even so, you might upgrade to an aftermarket performance muffler or a free-flowing exhaust system if more power and/or a more powerful sound is desired.