What you need to know about your car exhaust system

What’s the job of a car exhaust system?

What components are used in an exhaust system?

Exhaust systems have changed over the years as carmakers have been force to adapt to more stringent emissions standards. Let’s take a look at a typical exhaust system from the early ‘90’s and compare it to a late model vehicle.

Here’s the layout of an exhaust system for a 1993 Toyota Tercel with a 4-cylinder engine.

This is a pretty typical exhaust system layout for vehicles with a single catalytic converter. These older systems had only one oxygen sensor mounted close to the engine exhaust manifold. The exhaust pipe required a flexible joint to allow for the rocking movement found in transverse mounted engines. Since this first pipe didn’t contain the catalytic converter, it was often referred to as the flex pipe. This is not to be confused with universal flexible corrugated metal piping that’s used to fabricate exhaust pipe from scratch. These flexible joints are made from heavy duty stainless steel and wrapped with stainless steel braiding. The resonator serves to quiet the exhaust before final noise reduction in the muffler.

What goes wrong with car exhaust?

Car exhaust systems are exposed to extremely harsh conditions because they’re located under the vehicle. So they encounter road salt, snow, ice and road obstructions. Impacts can damage the expensive catalytic converter and muffler and weaken partially rusted pipes.

Rust through is the most common problem with car exhaust systems.

The rust can perforate exhaust pipes, muffler and resonator. When that happens, the exhaust system can’t do its job of quieting exhaust noise, and worse yet, can’t transport the deadly carbon monoxide to the rear of the vehicle. Also, once holes appear in a car exhaust system, the emissions monitoring readings can be compromised by the introduction of outside air.

There’s not much you can do to prevent rust through on the muffler and pipes. That’s a factor of how much road salt is used in your area. But there is one costly failure you can prevent; damage to the flexible joint.

Transverse mounted engines rotate slightly during acceleration. The engine mounts prevent excessive rocking movements and absorb some of the shock. But as the engine mounts wear, engine rock becomes more severe, causing the flexible joint on the exhaust system to flex to the point of breaking. If you ignore worn engine mounts, you’ll not only have to eventually replace the mounts, but also expensive exhaust system components like the flex pipe, as well as exhaust system hangers and brackets. 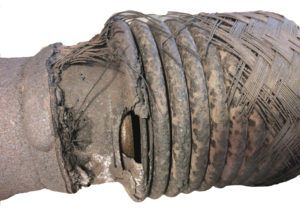