How Does an Exhaust System Work?

A car's exhaust system  consists of several components that work in harmony to funnel gases from the engine's combustion chamber out the back end of the car.

If one of those parts isn't working properly, it can cause the whole system to run less efficiently.

“The exhaust system serves two main functions,” says Bob Waeiss, owner of Integrity Automotive in Carmel, Indiana. “A, it’s for noise reduction. Without an exhaust, it’s going to be horribly loud. The other purpose is to funnel the exhaust safely away from the vehicle so it doesn’t enter the passenger compartment."

Vehicle exhaust contains contaminates that can negatively impact public health, so a properly working exhaust system can protect both the vehicle driver and the public by reducing its harmful emissions.

Waeiss explains how an exhaust system operates and the components that make up the system. 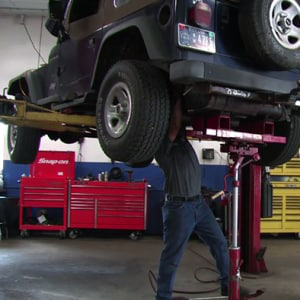 Is your car's exhaust system making strange noises? If so, it's probably time to take it in.

The exhaust pipe runs the length of the vehicle and is connected to all of the exhaust system's components. Most exhaust pipes found on newer vehicles are made of steel.

Some vehicles have dual exhaust systems, meaning they have two exhaust pipes instead of just one.

The engine’s cylinders – whether it be four or six – funnel the remaining fuel-air mixture from the combustion chamber into a device called the exhaust manifold. The basic job of the manifold is to collect the gas from the cylinder heads and distribute it to the exhaust pipe.

YourMechanic.com estimates the price of a new exhaust manifold, including parts and labor, ranges from $350 to $800, depending on the make and model of your car. 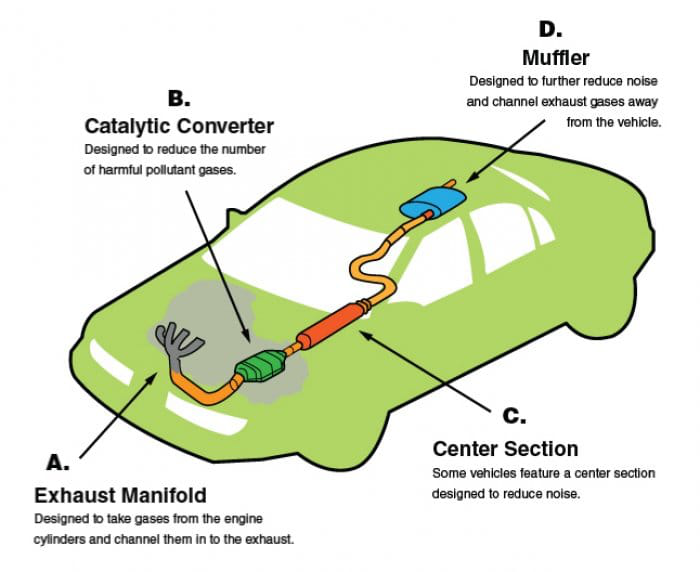 Located in the exhaust pipe or manifold, the oxygen sensor's job is to measure the ratio of oxygen to the exhaust gases.

“The information is then fed back into the [car’s] computer,” Waeiss says. “It detects the oxygen and helps control the fuel for efficiency."

The oxygen sensor, which is an electronic device, will alert the car's computer if the emission levels are too high.

The cost to replace an oxygen sensor, including labor, can range from $150 to $500, according to YourMechanic.com.

The average cost to replace a catalytic converter, including parts and labor, is $1,029, according to CostHelper.

From there, the remaining exhaust gases travel to an internal pipe or a resonator, which Waeiss says operates like a mini-muffler or front muffler. This eliminates some of the frequencies that come through the exhaust system.

Some cars have more than one resonator, which is located in an area of the exhaust system called the center section.

Perhaps one of the most commonly referred to components of an exhaust system, the muffler’s job is to limit noise as the gases leave the exhaust system.

Mufflers typically need to be replaced if there's a hole or it’s rusted through. A muffler costs about $100 on the low end to about $400 to $500 on the high end.

Cars with a dual exhaust system have two mufflers. 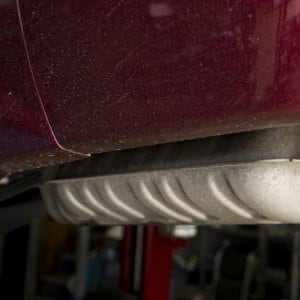 Is your car rumbling? It could be the muffler.